The Role of Linear Stability in Modeling Spray Atomization

The common Lagrangian-Eulerian modeling of liquid sprays is largely based on linear stability theory, where the associated growth rates and most unstable wavelengths are used in prescribing initial Lagrangian droplet characteristics. Using highly-resolved VoF simulations, the present work is aimed at examining the extent to which this linear stability and associated flow characteristics hold in a realistic spray configuration under normal operating conditions using the ECN spray A geometry. This involves a comparison between linear stability wavelength predictions, originating from two-phase Orr-Sommerfeld solutions, and those obtained from the VoF simulations. The results show that within the first 4 diameters beyond the orifice, the non-linear components of the Navier-Stokes have grown to 10% of the corresponding linear part in both the liquid and the gas phase, and continue to grow exponentially. The non-axial and non-fully developed flow profiles are particularly significant even within one diameter but do not develop as strongly as the non-linear components. Linear stability theory is able to adequately capture the initial surface disturbances, and there is reasonable agreement with VoF simulations, despite the fact that the base flow is not exactly the conventional one. A main finding from the work shows that while the most unstable modes are captured in the simulations and agree with theoretical predictions, these modes are not directly responsible for fragmenting the liquid core or causing primary atomization. Their action is limited to breaking up the surface of the jet, while the liquid core of the jet remains intact for another 20 jet diameters downstream.

Figure: Two instantaneous images of the jet breakup, with viewing directions oriented along the y and the z axis, are presented here. The image highlights 3 distinct parts of the atomization process. Linear modes of the surface disturbances exist initially up to x/d0 = 7. Further downstream, the dominant modes grow and breakup the surface, but the liquid core remains unperturbed. Finally primary atomization, or the complete destruction of the liquid core is observed around x/d0 = 37.8.

The Effect of Nozzle Internal Flow on Liquid Jet Breakup

Figure: From top to bottom, the figures correspond to External only, Educated spray A, and Unprocessed Spray A simulations. Contours of the time averaged, non-axial velocity are shown at different locations inside the nozzle orifice with part of the external liquid jet surface. The differences between the internal flow and liquid surface shape between the configurations is evident. The higher magnitudes for the non-axial component lead to prominent striations on the liquid jet surface.

The effect of nozzle surface features on the overall atomization behavior of a liquid jet is analyzed in the present computational work by adopting three representative geometries, namely a single X-ray tomography scan of the ECN Spray A nozzle (Unprocessed), a spline reconstruction of multiple scans (Educated), and a purely external flow configuration. The latter configuration is often used in fundamental jet atomization studies. Numerically, the two-phase flow is solved based on algebraic Volume-of-Fluid (VoF) methodology utilizing the OpenFoam solver, interFoam. Quantitative characterization of the surface features concerning the first two geometries reveals that while both of them have similar levels of cylindrical asymmetries, the nozzle configuration pertaining to the Unprocessed geometry has much larger surface features along the streamwise direction than the Educated geometry. This produces for the Unprocessed configuration a much larger degree of non-axial velocity components in the flow exiting the orifice and also a more pronounced disturbance of the liquid surface in the first few diameters downstream of the nozzle orifice. Furthermore, this heightened level of surface destabilization generates a much shorter intact liquid core length; i.e., it produces faster primary atomization. The surprising aspect of this finding is that the differences between the Unprocessed and Educated geometries are of O(1) ?m and they are able to produce O(1) mm effects in the intact liquid core length. In spite of more pronounced atomization for the Unprocessed geometry, the magnitude of the turbulent liquid kinetic energy is roughly the same as the Educated geometry. This highlights the important role of mean field quantities, in particular, non-axial velocity components, in precipitating primary atomization. At the other end of the spectrum, the external-only configuration has the mildest level of surface disturbances in the near field resulting in the longest intact liquid core length.

Linear instability predictions of liquid sheets injected into a gas medium are well established in the literature. These analyses are often used in Lagrangian-Eulerian spray simulations, a prominent simulation method, to model the dynamics occurring in the near-nozzle region. In the present work, these instability predictions are re-examined by first generalizing the treatment of interfacial conditions and related assumptions with a two-phase Orr-Sommerfeld (OS) system, and second, by employing highly-resolved-Volume-of-Fluid (VoF) simulations. After presenting some validation exercises for both the VoF and OS solvers, the OS predictions are compared to earlier studies from the literature leading to reasonable agreement in the limit as the boundary layer thickness tends to zero. Results from VoF simulations of liquid sheet injection are used to characterize the range of scales of the liquid structures immediately before atomization. The mean value in this range is found to be approximately two to three orders of magnitude larger than the corresponding predictions from previous studies. A two-phase mixing layer under the same physical conditions is used to examine this disparity, revealing that within the linear regime relatively good agreement exists between the VoF and OS predicted instability mechanism. However, the most unstable mode in the linear regime is too small to cause a fracture or atomization of the liquid sheet, and hence, cannot be directly responsible for the atomization. The generation of a much larger mode, which emerges well beyond the linear regime, is the one causing breakup. 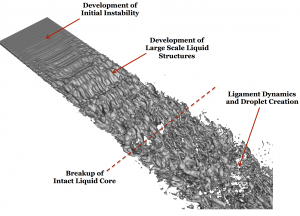 Figure: Visualization of an injected liquid undergoing deformation and breakup.

The breakup of a liquid jet and subsequent spray formation processes is generally found to consist of three regimes:

Figure: The three regimes in the spray formation process. Interface is colored by velocity magnitude.