Desuperheating is defined as the cooling of superheated vapor, usually steam, and can be performed by mixing the vapor with saturated or subcooled liquid or by convecting the steam through a cooled wall environment. Desuperheating is essential for systems which need to regulate the temperature of superheated steam and is often used to protect downstream piping and equipment. It has widespread applications in desalination plants, power generation, food processing, and petrochemical fields.In the present work, an analytical expression is developed for the mass loading limit, defined as the limit beyond which liquid is unable to be vaporized in a general desuperheating system. This limit is subsequently compared to predictions originating from 3D numerical simulations based on a Lagrangian-Eulerian framework in combination with a RANS treatment for the vapor phase. The computations show that even for cases having much smaller mass loadings than the theoretical limit yield significant accumulation of liquid along the walls. Furthermore, the numerical findings presented in terms of streamwise profiles of mean droplet diameter, average vapor temperature, vapor-droplet slip velocity, and liquid mass show that the desuperheating process can be described as taking place in two distinct zones. In the first zone, located in the near-field, the flow process is characterized by vigorous liquid atomization and significant exchanges of mass, momentum, and energy between the liquid and vapor phases. In the second zone, which resides beyond the near-field, the desuperheating process displays a significantly reduced degree of vaporization, a near-equilibration of phasic velocities, and a milder change in the vapor temperature along the streamwise direction.

Figure: Results corresponding to 50% mass loading case showing averaged temperature field in (a) and instantaneous spray droplet colored by slip velocity in (b). Both images show a close up view of the thermal sleeve region and the main pipe section and clearly illustrate the reduction in local vapor temperature coincident with the spray plume.

The development of numerical methods for two-phase flow with the capability to handle interfacial mass transfer due to phase change has been the subject of wide interest in recent years. This interest arises from the diversity of applications that can benefit from accurate simulations of boiling or condensation processes but also because the conservation laws at the interface introduce interesting & challenging computational problems, such as:

These effects would be easy to capture if infinitesimal numerical resolution is available to track the motion of an interface and then exactly replicate the behavior of the underlying differential equations. However, the challenge comes from the discrete computational stencil available for actual simulations.

A persistent effort of our group has been to learn about the numerical pitfalls of existing methods and also develop a scalable, useful and robust solver for phase change. We recently published the details of a solver developed using a sharp numerical scheme based on a high-order accurate level-set method. This was a finite difference approach to the problem with uniform, orthogonal computational framework. Now our focus has shifted to a finite volume strategy that is more robust towards non-orthogonal, non-uniform grids, which is also one of the reasons that most commercial fluid dynamics codes such as Fluent, Converge, and Star CCM+ use the finite volume method. Development of a stable finite volume solver for phase change can prove to be an important development.

Currently, we are working to incorporate the finite difference strategies used in level-set based implementations for phase change into the finite volume framework. A key idea in our implementation is to apply the interfacial boundary conditions, that undergo a sudden jump in values, using the ghost fluid method. Simply put, this method allows a stable evaluation of derivatives at the interface by assuming that phase 1 exists beyond the interface boundary into phase 2. Note that this is simply a fictitious, ghost phase that is assumed. This circumvents the continuity issue faced due to a sudden jump of the underlying quantities for which, spatial derivatives are needed. 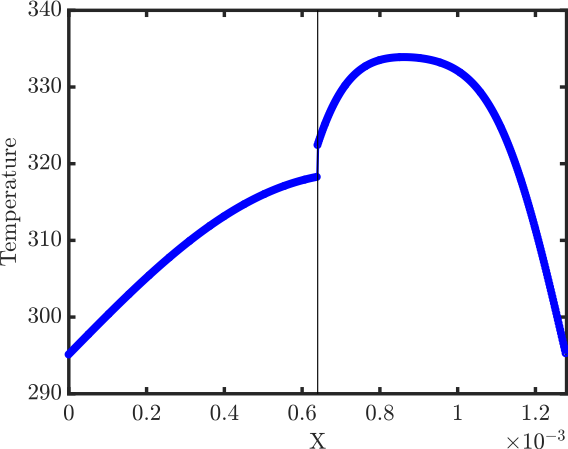 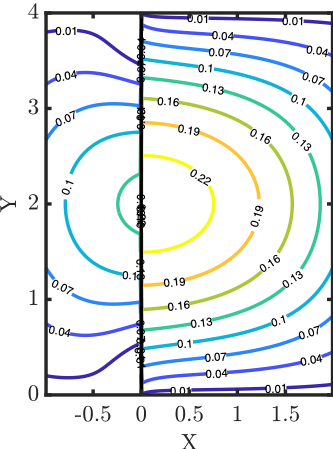 Figure Solution of an unsteady diffusion system in 1D and 2D representing an accurately captured jump in temperature and its gradient.

DNS studies aimed at solving flows undergoing phase change commonly make the following two assumptions: i) a constant interface temperature and ii) an incompressible flow treatment in both the gas and liquid regions, with the exception of the interface. The physical validity of these assumptions is examined in this work by studying a canonical, spherically symmetric bubble growth configuration, which is a popular validation exercise in DNS papers. The reference solutions that are used to examine DNS results are based on a compressible saturated treatment of the bubble contents, coupled to a generalized form of the Rayleigh-Plesset equation, and an Arbitrary-Lagrangian-Eulerian solution of the liquid phase energy equation. Results show that DNS predictions are inaccurate during the initial period of bubble growth, which coincides with the inertial growth stage. Furthermore, this initial period becomes more significant with increasing Jakob number. A closed-form expression for a threshold time is derived, beyond which the commonly employed DNS assumptions hold. Based on this threshold time, a corresponding bubble radius is obtained. This radius together with a corresponding Scriven-based temperature profile provide appropriate initial conditions such that DNS treatment based on the aforementioned assumptions remains valid over a broad range of operating conditions. 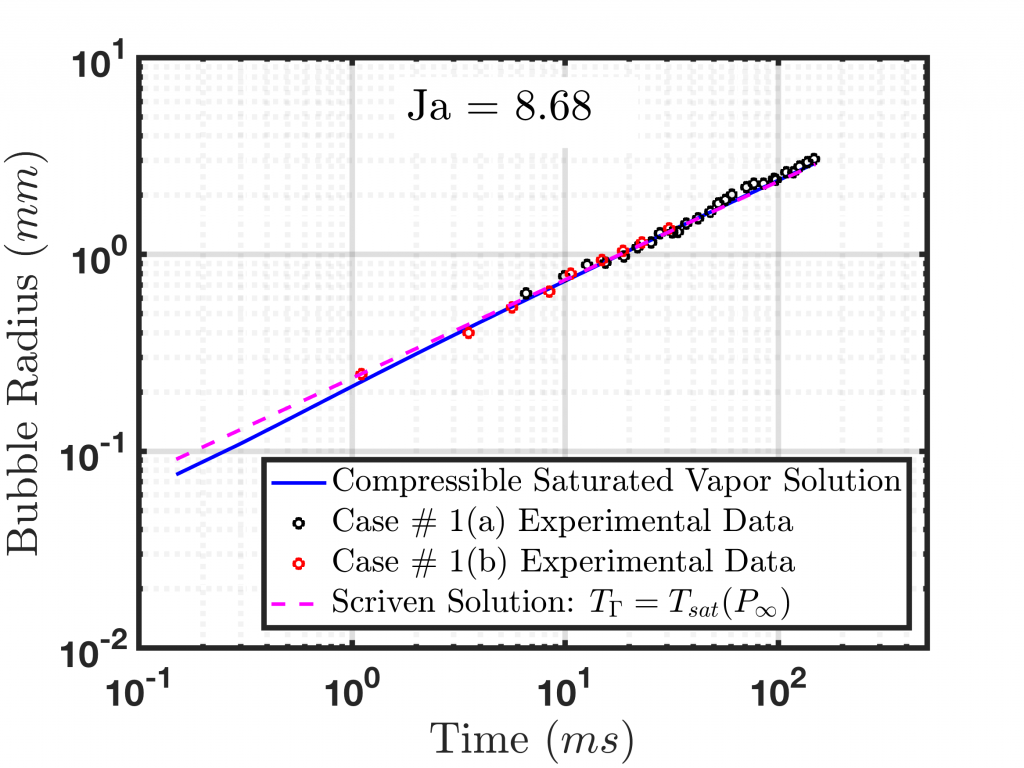 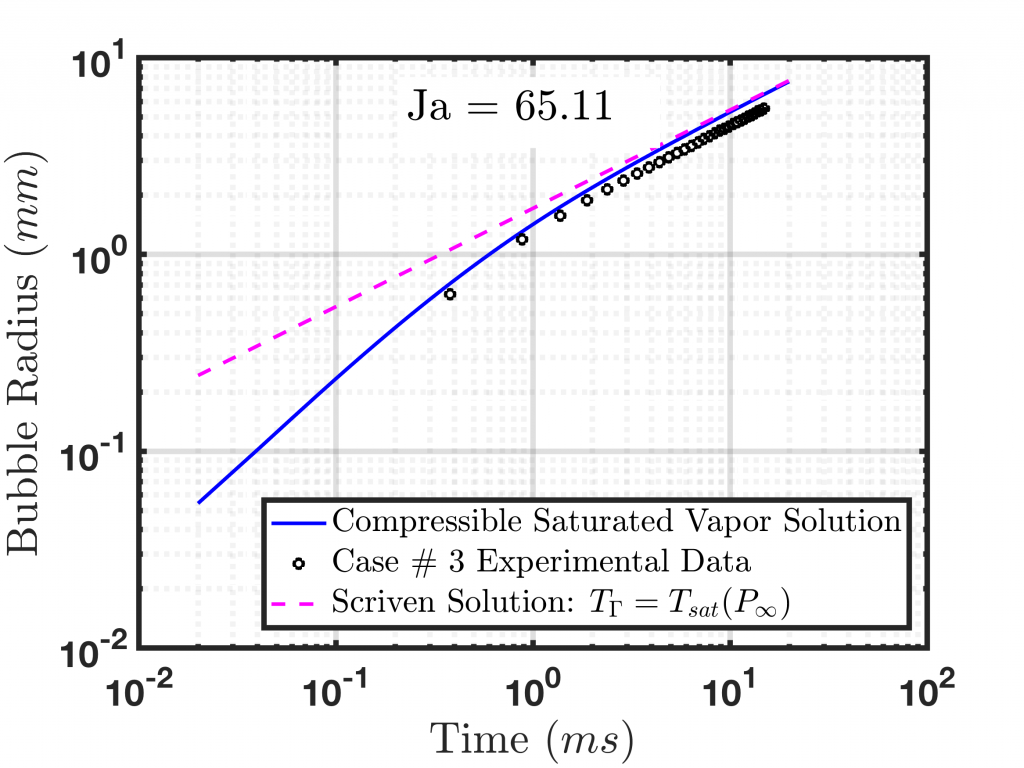 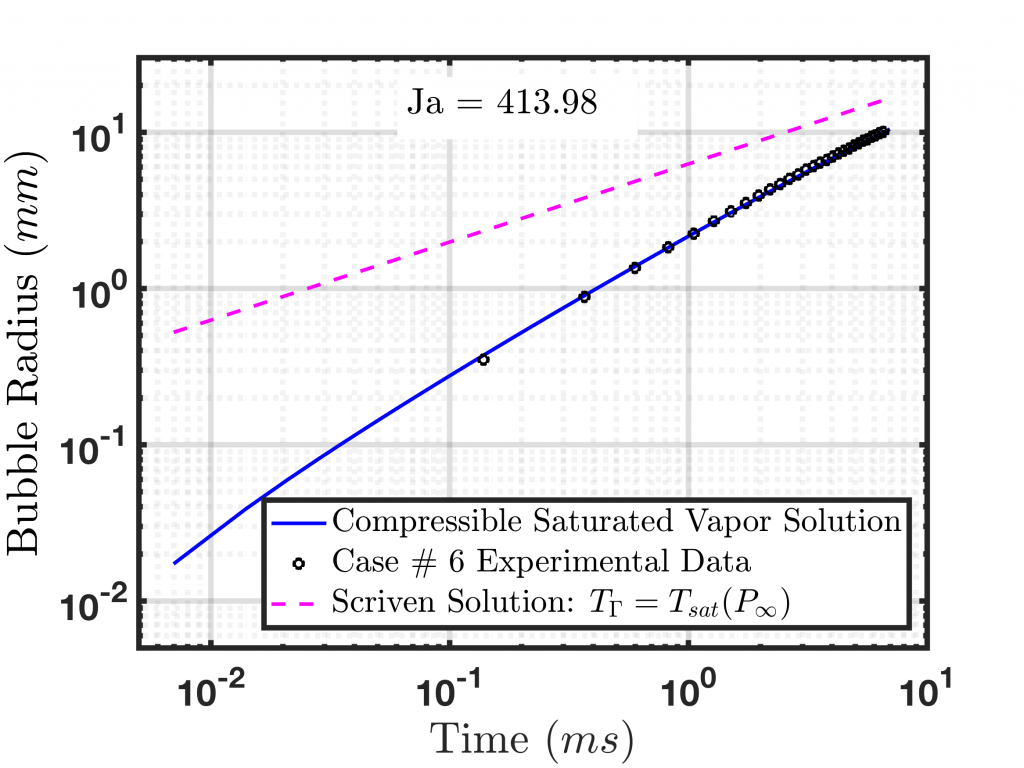 Figure: The bubble radius is shown as predicted by the Scriven solution, our compressible saturated vapor model, and experimental results. The Scriven solution is essentially a constant vapor density (incompressible) and constant interfacial temperature treatment. The results indicate that for early times, and particularly as the Jakob number increases (more pronounced vaporization), the common assumptions inherited in the Scriven solution and adopted in various computations become invalid.